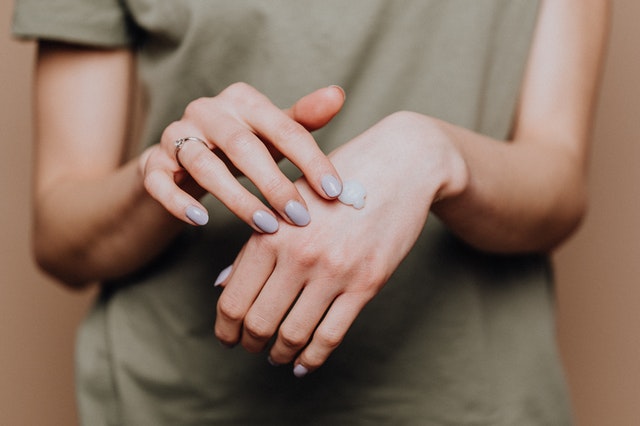 Eczema, also referred to as atopic dermatitis, is an inflammatory skin disorder. It is chronic, meaning it affects individuals throughout their lifetimes, and common – affecting around 1 in 10 people in some populations.1 Eczema may come and go. It also varies in severity between individuals. It affects adults, children, and infants – but what is the best lotion for eczema?

Eczema belongs to a group of disorders known as “atopic disorders”. Similar disorders include allergic rhinitis, asthma, and conjunctivitis.2 Individuals affected by one of these disorders may also be affected by others in the cluster.

Eczema is a complex disorder. It is caused by a mixture of factors, including genetic problems, environmental factors, and issues with the immune system.1

People with eczema can experience a variety of symptoms. These typically include dry, sensitive, or itchy skin and skin lesions.2 Different areas of the skin may be involved, including the face, hands, and contact points such as knees and elbows. Repeated scratching of itchy lesions may further irritate the skin and lead to an uncomfortable cycle, called the itch-scratch cycle.1

In recent years, the number of people with eczema has increased. The root cause of this is unknown, but it is possible that it involves an increase in environmental triggers.3

How to deal with eczema?

Because the severity of eczema varies so widely between individuals with the condition, the ideal treatment will vary widely as well. What these treatments have in common is that they attack the basic factors responsible for the disorder.4

The environmental triggers for eczema may vary as widely as the symptoms involved. Food and airborne triggers are the ones most commonly identified.1

Food triggers are more common among children affected by eczema.1 A food diary can help to determine whether outbreaks are related to different or new diets.

Common food triggers include dairy, eggs, wheat, soy, and peanuts. Those triggered by one of these foods may be similarly affected by others.4

On the other hand, reactions to airborne triggers tend to increase with age.1

Airborne triggers can include dust, mites, pollen, animal fur, and molds. These triggers are often responsible for moderate to severe cases of eczema.2

Airborne triggers can be minimized by frequent vacuuming, using hypoallergenic pillows and bedding, and avoiding carpeting and heavy curtains.2

Healthcare providers that specialize in the immune system can perform tests to determine what environmental triggers elicit reactions.

The itch-scratch cycle that affects those with eczema can lead to damage of the skin barrier.1 That, coupled with the excess dryness caused by the disorder, can be treated using emollients.4

Emollients are soothing creams or lotions applied to the skin that improve hydration.

These creams should be applied within a few minutes after taking a shower or bath to trap moisture.4

There are a wide variety of emollient lotions and creams.

Common ingredients found in emollients include petroleum, glycerin, fatty acids, and plant products. These ingredients act as occlusive and humectant agents which both trap water.3

Some emollients contain additional ingredients that claim to help with inflammation.

Some emollients use other ingredients such as ceramides, antimicrobial peptides, or ectoin.

Ceramides are fat molecules that are found in healthy skin. Some studies show that people with eczema have lower concentrations of ceramides than those without. It is believed that replacing the missing ceramides can have anti-inflammatory, anti-microbial, and overall protective effects on the skin.3

Antimicrobial peptides are proteins in the immune system that protect the body against bad bacteria. It is believed that antimicrobial peptides in emollients attack invading bacteria on the skin of those with eczema. This could prevent infection of the already weakened skin. However, few specific studies have been done on this ingredient.3

Ectoin is a new compound in the treatment of eczema. It works by changing the way that cells respond to liquids. This compound comes from bacteria, where it protects the organism against drying out. Ectoin is now being tested on human skin to determine whether it can provide the same protection.3

Emollients vary not only in their ingredients but in their consistency as well.

However, some studies showed that those who use water-based lotions primarily have overall drier skin.3

The best lotion for eczema will depend on the severity of the outbreak and personal preference.

When repairing the skin barrier and removing environmental triggers don’t work, stronger treatments are often introduced. These are aimed at calming the immune response.2

The most commonly used treatment in this category is a steroid cream. This is applied topically and reduces itching and inflammation.

However, the use of steroid creams can bring about side effects such as thin skin, other kinds of dermatitis, and adrenal problems.4 The strength of the steroid cream prescribed will vary according to the severity of the disorder.

Other topical medications that affect the immune system, called immodulators, may also be prescribed depending on disorder severity and whether the person affected is a good candidate for steroids.3

There are additional medications to fight eczema, which may be taken orally. These also affect the immune system.

These, however, are typically used when the disorder is very severe. They are usually potent and may have significant side effects.4

Photo by Karolina Grabowska from Pexels

How does benzoyl peroxide work?

How are bone mineral density and the microbiome linked?

Viewing nature videos on social media during the COVID-19 lockdown improved mental well-being, according to study

Do you enjoy watching videos of cute animals on social media? Do you find that it helps you cope with stress? If you do, you are not alone.  A new study published in Frontiers in Psychology suggests that engaging with nature-related content through social media has provided important support for well-being.1 This University of Surrey […]