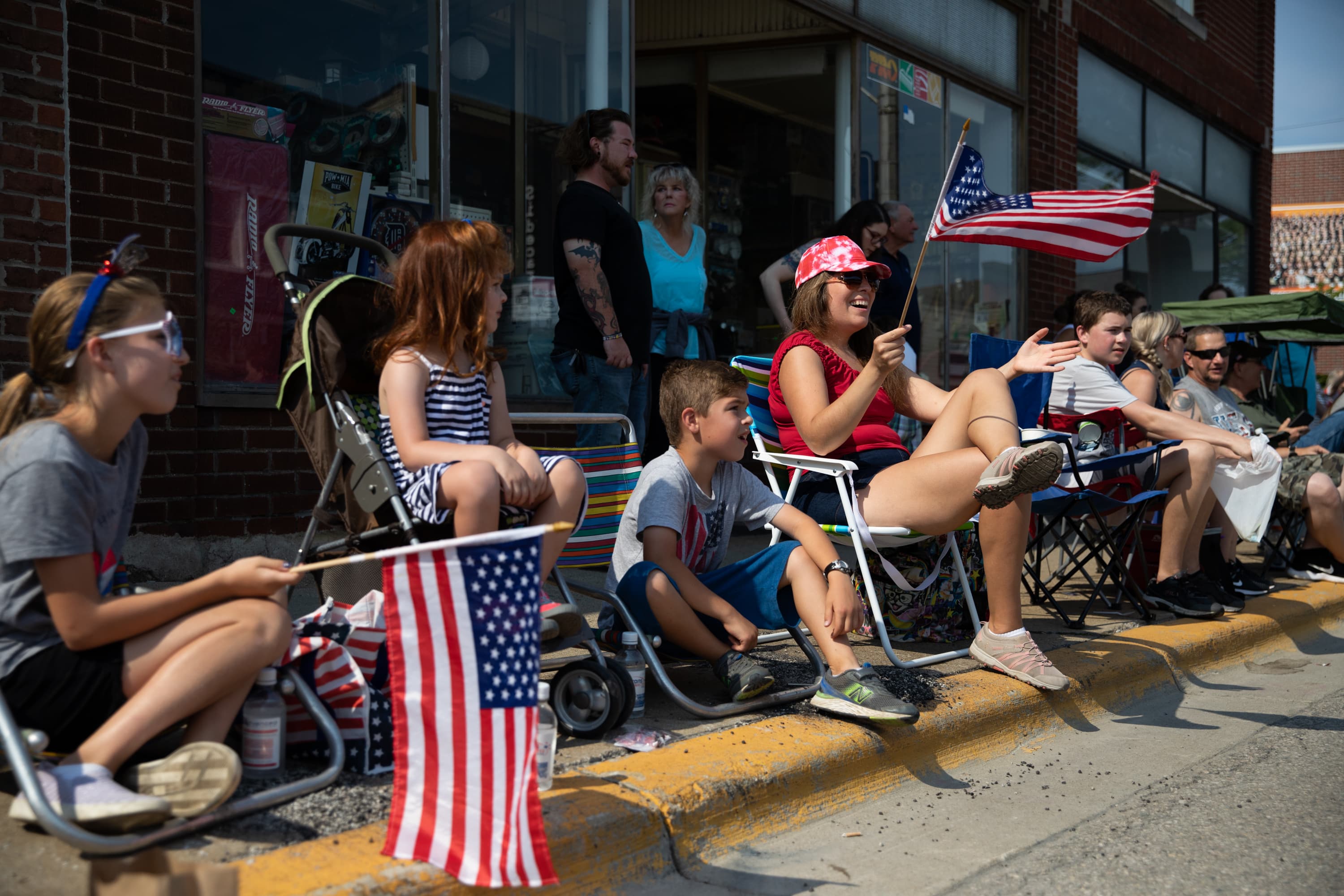 Residents line up with chairs on the side of the street as they watch an Independence Day celebration parade on July 4, 2021 in Brighton, Michigan.

Americans are celebrating the Fourth of July after the coronavirus pandemic forced the cancellation of most events last year, raising hopes that life is on the road to a semblance of normalcy as cases and deaths from Covid-19 near record lows.

The White House has encouraged people to come together and watch fireworks displays to mark the country’s “independence” from the virus. Businesses and restaurants are reopening across the country as restrictions are being relaxed and air travel briefly surpassed 2019 levels at the start of the holiday weekend.

President Joe Biden is hosting an Independence Day party on Sunday with 1,000 essential workers and military families on the South Lawn of the White House, marking the first large-scale event held by the president. He delivered remarks on the progress the U.S. has made against the virus.

“This year the Fourth of July is a day of special celebration for we are emerging from the darkness of a year of pandemic and isolation, a year of pain, fear and heartbreaking loss,” Biden said during remarks given on the White House South Lawn.

“From empty stadiums and arenas to fans back to their seats cheering together again. From families pressing hands against a window to grandparents hugging their grandchildren once again. We’re back travelling again, we’re back seeing each other one again,” Biden said.

Though the country has made significant progress against the pandemic due to the vaccination rollout, the Fourth of July weekend also comes as U.S. health officials monitor the spread of the Covid delta variant, which is believed to be more transmissible than other strains earlier in the pandemic.

Coronavirus cases are much lower than the peak in January, when the country saw more than 300,000 new cases on a single day, according to a CNBC analysis of Johns Hopkins University data.

Still, cases have been trending upward in the recent days and some health officials warn that the U.S. shouldn’t declare victory over the pandemic yet due to the delta variant, which now comprises about a quarter of infections among mostly unvaccinated people.

As of Sunday, the seven-day average of new daily Covid cases in the U.S. is 13,196, an 11% increase over the last week, according to CNBC’s analysis of JHU data.

Deaths in the U.S. have been slowing for months. The seven-day average of new Covid deaths is 225, down 23% from one week prior, according to CNBC’s analysis.

White House Covid czar Jeff Zients on Sunday defended the Biden administration’s upcoming Fourth of July party and said the U.S. has “a lot to celebrate,” citing that two out of three adult Americans have received at least one dose of the vaccine.

“We are much further along than I think anyone anticipated in this fight against the pandemic,” Zients said during an interview on ABC’s “This Week.”

In fact, the administration narrowly missed its goal to fully immunize 160 million Americans and have 70% of adults with at least one shot by the Fourth of July. But nearly 156 million Americans are now fully vaccinated and more than 182 million have received at least one dose, according to the Centers for Disease Control and Prevention.

Dr. Scott Gottlieb told CNBC on Friday that most people should feel comfortable gathering over Independence Day weekend, citing high vaccination rates and low virus infection levels in much of the country.

“There’s very low prevalence around the country. You have to judge based on where you are,” Gottlieb said on “Squawk Box.” “In some parts of the country where you see prevalence rising … I think people should exercise more caution.”

Roughly 1,000 counties in the U.S., mostly located in the Southeast and Midwest, have vaccination coverage of less than 30%, according to the CDC. And in some counties, the delta variant rates are as high as 50%.

Dr. Anthony Fauci, the country’s top infectious disease expert, said on Sunday that people in areas with low vaccination rates, such as Mississippi, should “go the extra mile” and wear a mask even if they’re vaccinated.

“If you put yourself in an environment in which you have a high level of viral dynamics and a very low level of vaccine, you might want to go the extra step … even though the vaccines themselves are highly effective,” Fauci said during an interview on NBC’s “Meet the Press.”

The Pfizer–BioNTech and Moderna vaccines were authorized by the Food and Drug Administration for emergency use in December, followed by the Johnson & Johnson vaccine in February.

12 Foundations with the Most Inclusive Shade Ranges

This podiatrist-approved shoe is oh-so-comfy. We often talk about comfortable shoes here at Health, whether it’s ballet flats with arch support, booties you can actually walk in, or comfortable heels that won’t wreck your feet. But lately, we’ve been really into mules; not only is this style a major spring fashion trend, but it’s also the perfect shoe for […]