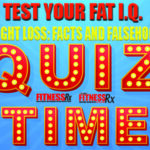 Knowing the facts about training, nutrition and exercise is the key to becoming fit, reaching your goals, feeling better, having more energy and being healthier. Following is a list of fitness facts and falsehoods. Can you tell which statements are true or false? Answers follow the questions.

1. Skipping breakfast is a great way to cut calories and lose weight.

2. Counting the “net carbs” of a product is crucial for those concerned with nutrition.

3. While adult obesity is on the rise in America, the number of children in the nation who are fat is the same as it was three decades ago.

4. Some research has discovered that depression is a side effect of low-carb diets.

5. According to research, exercising at least one hour a day of exercise is the best way to lose weight and keep it off.

8. If you take in fewer calories in your diet than you use through metabolism, exercise and digestion, you will lose weight.

9. Lifting weights will not help you burn fat.

1. False. Many people think they are getting an early start on calorie cutting when they skip breakfast. But according to researchers at the University of Texas, El Paso, skipping breakfast and lunch, as many people do, results in frequent eating later. Eating a healthy breakfast that includes protein, starchy carbs, vegetables and drinking plenty of water and keeping hydrated will help curb your hunger throughout the day.

2. False. “Net carbs” is nutritional nonsense palmed off on consumers by diet promoters and food makers. The idea is that there are good carbs and bad carbs. Food labels listing “net carbs” only count the high glycemic index carbs and don’t list the low glycemic carbs as part of the total carbohydrate content.

3. False. American children are not immune to the national obesity epidemic. The prevalence of overweight and obesity among children and adolescents aged 5-19 has risen dramatically from just 4% in 1975 to just over 18% in 2016. The rise has occurred similarly among both boys and girls: in 2016 18% of girls and 19% of boys were overweight. Researchers found that parents play a vital role in preventing fat kids. Exercise regularly as a family and eat healthy foods and your children probably won’t have a weight problem.

5. True. University of Pittsburgh scientists found that people should exercise a minimum of one hour a day to lose weight and keep it off. This is twice the amount of time the Surgeon General recommended in a landmark report on exercise published in 1996. Obviously, 30 minutes a day is not enough, because obesity rates have skyrocketed over the years.

6. False (in the short run) and True (for longer repeated efforts). University of Colorado scientists found that cyclists on a low-carb diet performed just as well on a 45-minute endurance test as those eating a high-carb diet. But low-carb diet fans should not start training for a marathon. Exercise on a low-carb diet becomes harder each day as muscle fuel stores become further depleted. The low-carb diet is not a very good idea for anyone who exercises intensely more than two or three times a week.

7. False. You will burn many more calories when you train intensely than when you exercise slowly. Intense exercise causes you to burn more calories and fat after the exercise is over. So, when trying to lose fat, work harder and burn more total calories.

9. False. Lifting weights builds muscle and muscle works around the clock burning calories. You will also burn off inner-muscular fat and increase your metabolism. So, the more muscle you have, the more calories you will burn.

How Did You Do?

SINGAPORE — Malaysia’s daily Covid-19 cases are climbing rapidly and have surpassed India’s on one critical measure, according to statistics site Our World in Data. India has been experiencing a devastating second wave since April and has the world’s second largest Covid caseload. The country’s daily case count, while trending downward, has remained elevated at […]

Vials with Pfizer-BioNTech and Moderna coronavirus disease (COVID-19) vaccine labels are seen in this illustration picture taken March 19, 2021. Dado Ruvic | Reuters The U.S. Food and Drug Administration on Friday added a warning to patient and provider fact sheets for the Pfizer and Moderna Covid-19 vaccines to indicate a rare risk of heart […]