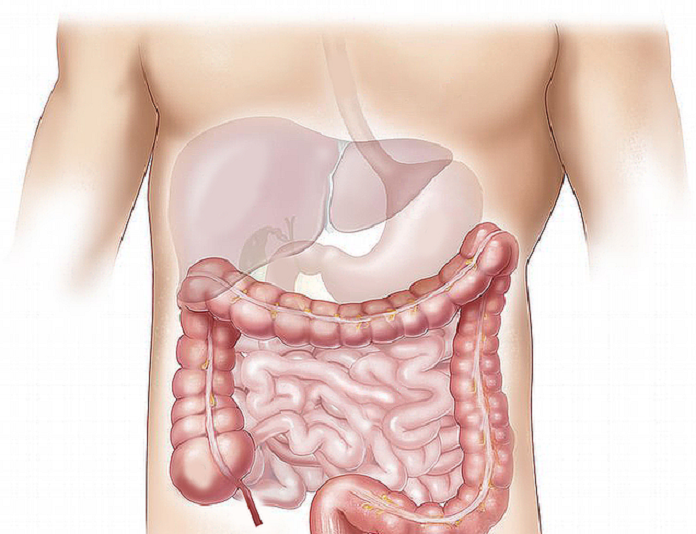 New research led by researchers at the University of Limerick and a team from University Hospital Limerick in Ireland explored the link between Crohn’s disease and fatty tissue around the intestine.

Crohn’s disease is a chronic inflammatory bowel condition that can occur in different areas of the digestive tract. Several factors play a role in the development of Crohn’s, but the exact cause remains unknown.

The study, published in the journal Scientific Reports, suggests that Crohn’s disease may be a fatty intestine condition. The body composition of 30 patients, 13 males and 17 females aged 20 to 73 years, recruited from the patient records at University of Limerick Hospital, was measured using dual energy c-ray absorptiometry (DEXA). DEXA provides a 3-component model of body composition by measuring fat, lean body mass, and bone. Participants were classified as either in remission or relapse. Their dietary records were completed, and physical activity was monitored.

Irrespective of relapse or remission, participants with Crohn’s disease incorporated fat into their body in a way different from a large representative healthy general population sample. Participants with Crohn’s exhibited elevated gynoid fat, fat around the hips and thighs, and reduced android fat, fat around the waist. No statistical difference was found between relapsing or remitting Crohn’s disease participants, but a considerable difference was found in regional adiposity between Crohn’s patients and the general population.

Participants with Crohn’s disease exhibit preferential deposition of fat in the hips and upper thighs rather than the abdomen, suggesting a tentative link between regional adiposity and Crohn’s as a non-alcoholic fatty intestine condition. The researchers note that the body composition of these patients is complex and multifaceted. The duration and stage of the disease correlate with elevated adiposity as well as the medications used for treatment, which alter body composition and are known to result in fat mass gain.

Despite the small study cohort, researchers suggest that the association between Crohn’s disease and fatty intestinal tissue offers a new path to investigate this disease, but additional, large-scale studies are required.

Image by Elionas2 from Pixabay

Are muscle relaxants for low back pain effective?

If you experience lower back pain, you are not alone. According to a systematic analysis for the Global Burden of Disease Study 2017, lower back pain has been the leading cause of disability across the globe for the past 30 years.1 Muscle relaxants are commonly prescribed to treat low back pain. Muscle relaxants, including non-benzodiazepine […]

Canadian researchers have proposed a method to detect COVID-19 infection rates in wastewater through sewer sensors. The COVID-19 pandemic has presented a challenge to researchers because some of the spread of the virus has been from people that show no symptoms of the virus (1). Known as asymptomatic carriers, it is unknown how many cases […]

Monkeypox is spreading around the world. What is the disease and how dangerous is it?

May 20, 2022admin
We use cookies on our website to give you the most relevant experience by remembering your preferences and repeat visits. By clicking “Accept All”, you consent to the use of ALL the cookies. However, you may visit "Cookie Settings" to provide a controlled consent.
Cookie SettingsAccept All
Manage consent