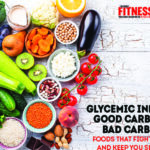 While the glycemic index has some value in helping to differentiate “good carbs” from “bad carbs,” it isn’t the gold standard some make it out to be. First, a little background: The glycemic index was originally created to help diabetics adjust their insulin dosage. It measures the speed at which carbs enter the bloodstream and ranks the foods against a yardstick (usually white bread, which has a glycemic rating of 100). Carbs that cause a rapid elevation in blood sugar (i.e., glucose) are termed high glycemic, while those that are “time-released” and maintain stable levels of blood sugar are called low glycemic.

The problem with high-glycemic foods is that they tend to be lipogenic (i.e., fat promoting). A spike in blood sugar levels causes your pancreas to release the hormone insulin to clear the sugar from circulation. Unfortunately, insulin is a storage hormone that turns on various fat storage mechanisms and blocks certain enzymes that are responsible for lipolysis (i.e., fat breakdown). When insulin levels are high, excess nutrients are more readily shuttled into adipose cells, resulting in increased levels of body fat.

Furthermore, the rush of insulin clears sugars from your circulatory system in such an expeditious fashion that it creates a rebound effect, producing a sudden and dramatic drop in blood sugar levels. A hypoglycemic state is induced, causing hunger pangs and food cravings. This creates a vicious cycle that encourages binge eating. As a result, more calories are consumed (generally in the form of high-glycemic foods) and fat storage is heightened even further.

However, simply choosing foods with a low glycemic rating won’t necessarily keep you slim and healthy. Understand that food isn’t consumed in a vacuum. A meal generally consists of a combination of different foods (i.e., chicken and rice, turkey on rye, etc.) and when fats and proteins are consumed with a carbohydrate, digestion is slowed and the glycemic response is mitigated.

More importantly, the glycemic index fails to distinguish whether or not a food has nutritional value. For example, a carrot has a higher glycemic score than a Snickers bar, but there should be little doubt that the carrot is more nutritious. Numerous other items such as doughnuts and ice cream also have low glycemic ratings, yet by no means could they be classified as “healthy” foods. All things considered, it’s misguided to solely rely on the glycemic index to guide your choice of carbohydrate.

A better way to choose carbohydrates is by their nutrient density – the amount of vitamins, minerals and fiber in the food. By nature, nutrient-dense carbs will be low on the glycemic scale and thus, maintain stable blood sugar levels. But as opposed to some low glycemic foods, they also supply your body with essential compounds that enhance metabolic function. Many of the vitamins and minerals are used as co-factors that assist the body in fat burning. Others serve as antioxidants that keep cells functioning optimally. And fiber promotes satiety, decreasing the urge to overeat.

As a rule, nutrient-dense carbs will be unrefined (processing removes much of the vitamins, minerals and fiber from a food). By sticking with whole grains and fresh fruit and vegetables for your carbohydrates, you’ll pretty much ensure consuming a low glycemic diet that’s replete with healthy nutrients.

The Seychelles is the most vaccinated nation on Earth. But Covid has surged

A woman holding an umbrella walks in a street in the Seychelles’ capital Victoria. Valery Sharifulin | TASS | Getty Images The Seychelles is causing concern for world health experts after a rise of Covid-19 cases among fully vaccinated individuals. The World Health Organization said Tuesday that it would review coronavirus data from the Seychelles, […]

Johnson & Johnson Covid-19 vaccine recipients are better off getting a booster shot from Pfizer or Moderna, a highly anticipated U.S. study suggested Wednesday. The National Institutes of Health study on “mixing and matching” Covid vaccines included more than 450 adults who have received one of the three regimens currently available in the United States: […]

No cases of new omicron Covid variant in the U.S. have been detected, CDC says

‘I use it for life’: Mike Tyson joins the list of celebrities launching a cannabis line